I hope you have all had a great Christmas and New year break with plenty of fishy tales to tell. I have had a very busy period with plenty of great captures for my clients plus a few tales of the big one that got away! 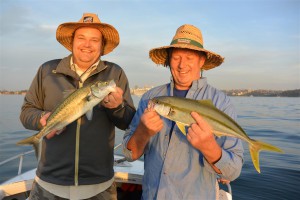 multiple species from one school of fish is not uncommon here in Sydney. 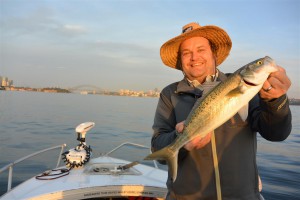 Some great fishing was had on Sydney’s doorstep just before Christmas.

Before this rain turned the whole system brown we were experiencing some great bream on surface lures on the flats using poppers and walk the dog style stick baits. There was also a good bite on cicada eating bream with some nice fish to 40cm plus coming to the net and a few of unstoppable proportions that won their freedom in tight snag ridden country. 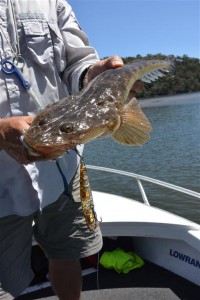 The odd flathead is partial to well presented surface lure worked across the shallow flats. 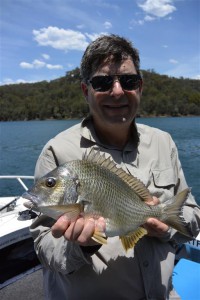 Big bream on surface cicada imitations sure does get the heart rate up!

Sydney harbour was a great playground leading up to the new year with the big surface feeding schools of Autralian salmon, kingfish, bonito and tailor devouring the micro bait most mornings. Light spin tackle and a selection of lures in differing profiles is the key to consistency. The highlight being that you didnt know which species you were going to hook next as they all fed together within sight of the world famous Sydney Harbour Bridge, I really need to pinch myself daily to remind myself how lucky i am to have this fishery as my office. 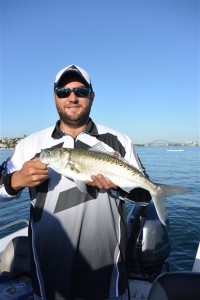 Aussie Salmon are a tough adversary, taking large powerful runs then run straight back at the angler and leaping into the air to throw the hooks. 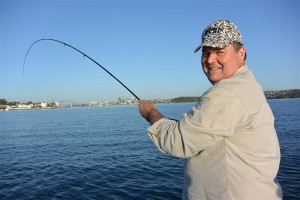 Hooked up to an Aussie salmon on fly within sight of the harbour bridge.

Most Kingfish we have encountered this season have been on lures and some nice fish into the high seventies have been landed with a few getting away that will give you nightmares. It’s been a trade off between fishing light enough to get a bite and heavy enough to stop that fish of a lifetime. I carry a wide selection of Shimano gear on board to try and have the most appropriate for the situation at hand on any given day. 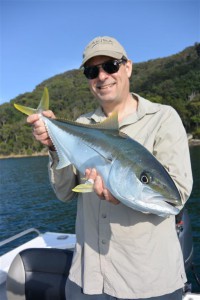 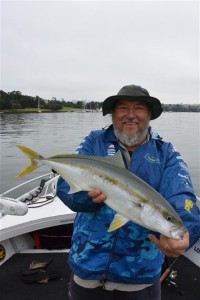 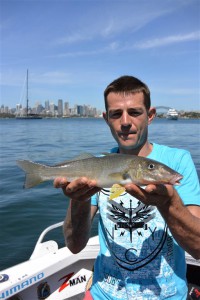 When the surface frenzies slow down sinking a lure to the bottom can pay dividends with stud whiting like this one.

Some terrific Mulloway were captured leading up to December with some sessions yeilding 10 or more fish to just under a meter in length on live baits and lures. I start targeting Jewfish from March through to next spring so if you are looking to expand your knowledge on this species and have a chance at encountering some sensational Mulloway fishing on Sydney’s doorstep get in early to secure the better dates/tides. 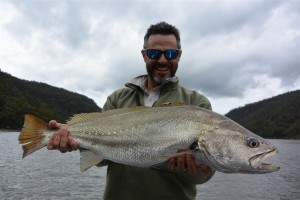 Lure casting and live baiting are both effective techniques to master to catch quality jewfish like this. 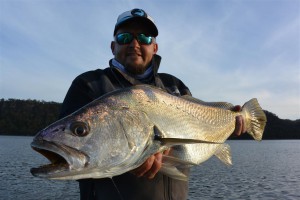 Some great Mulloway will be hunting around this Autumn.

All in all its shaping up to be a great end of summer and  start of autumn especially with the recent fresh which will reinvigorate all manner of species and add much needed nutrients to the waterways. Species you will likely encounter on an upcoming charter include: Estuary perch, Kingfish, Mulloway, Bream, Flathead, Salmon, Bonito, Frigate mackeral, mack tuna, tailor and squid.