It’s not too often in business you recieve such detailed reviews from amazingly articulate clients. Below is the feedback I recieved after a 5hr half day trip on the beautiful Hawkesbury River guiding a husband, wife and son helping them learn and understand the fundamental techniques of using soft plastics. To say I was shocked is an understatement, that I could have such an impact in such a short period of time, really put some perspective on what I do for a “JOB”. Reading this for the first time via email brought a tear to my eye and has made me realise how lucky I really am to be “living the dream”. Please read on as Paul details his time spent with us this past September… 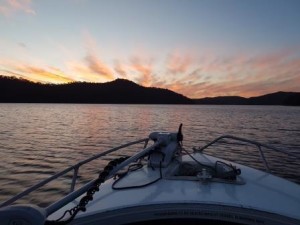 Choosing Sydney Sportfishing Adventures to be our guide/instructor on the Hawkesbury River has turned out to be the best decision and investment I have ever made when planning a holiday.

From the beginning via email, Dan Selby was prompt, accommodating and friendly.  I could tell immediately that my family and I would be receiving much more than the average fishing charter.  Dan listened to my requests and customised a fishing adventure to match.

After a friendly meet and greet, my wife Tam, my teenage son Alex and I boarded Dan’s comfortable, fast boat. We arrived shortly at a beautiful, classic Hawkesbury River sandstone cliff. We started learning right away, with expert tips explained and demonstrated by Dan in easy to follow steps.  He identified issues with my cast and retrieve technique, and helped me to correct past habits at every cast.  Indeed, he was also very encouraging when we all followed through with his instructions.  This was important to me as I wanted my son to learn and be rewarded with positive language from a professional instructor.

We moved from one stunning location to the next, and at each Dan identified and relayed his knowledge on the lifestyle of the resident birdlife, such as: Wedge-tailed Eagles, Sea Eagles and Cormorants.  We were fortunate enough to witness eagles battling for territory.

At each spot Dan helped us to refine our technique with soft-plastics cast and retrieve. It was only a matter of time before the first fish was landed by my son Alex; and we all cheered.  Not long after I pulled in a 49cm flathead, and then another in the high 30’s.  Alex followed the trend again with another flatty at 43cm.  At each and every step, Dan provided clear instructions to ensure the strikes were converted to catches.  We kept the three flathead in the well on Dan’s boat, and he said he would show us how to fillet them when we return.

At one location – while Dan was explaining tide currents and eddies – he spotted a “bust-up” and instructed us all to target that area.  Our casting had already become more accurate by this stage (just two hours into the adventure), but best of all was Tam’s cast when she placed her lure right at the rock-wall, and into the frenzy of baitfish. As Dan was explaining the nature of the hunter and the hunted, Tam’s rod bent, and so Dan instructed her to wind, wind, wind.  It was all very exciting when my wife landed a 40cm tailor.

In the final hour we moved to another location where Dan pointed out some caves that contained some indigenous markings. We discussed and theorised what it must have been like for them when tall ships sailed up the river.  We hooked a few smaller fish here, but then just before it was time to go, my rod bent over and it was difficult to hold on.  The strain on this fish was more than I have experienced before, and with Dan’s advice I moved around the boat, letting the fish run a few times.  Then lifting and winding and lifting and winding when possible, I eventually landed a 50cm Australian Salmon.  I know that’s not huge, but my goodness they do have some fight in them.  It was thrilling! 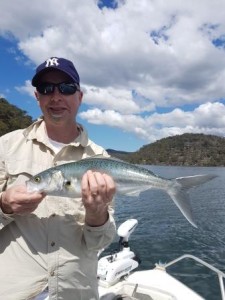 On return, as promised Dan showed us how to fillet flathead. While doing so he also explained the anatomy of the Dusky Flathead: from its teeth and shape of its mouth, to its organs and even the contents of its stomach.  This was clearly knowledge gained from many years of experience and study.

For me the most impressive factor about our fishing adventure was witnessing the way that Dan Selby uses all of his senses at once. He is aware of the status of all three passengers in his boat at all times. He was acutely aware of the position of my finger on my line before casting, and the angle of Tam’s rod, and the length of leader on Alex’ rod, and the distance of the boat from the rocks, and the position of the sun relative to the cliffs, and the wind direction, the tide, the current, when to duck, the location of baitfish, the drop-off, the presentation of the lure . . . and so much more; all at once.  Somehow he does all of this and also mixes in some jokes and banter.  From one trainer to another – that’s seriously impressive Dan.

I am now booking my next boating holiday, and it will definitely include another day on the river with Sydney Sportfishing Adventures and Dan Selby.

On behalf of Tam and Alex, thanks again for a truly brilliant experience.