I hope you have all had a safe and happy festive season with plenty of fishy tales to tell.

We have had a fantastic end to 2017 and start to 2018 with boat loads of fish willing to bite our client’s baits and lures!

Kingfish have been the standout, and the bait ball action prior to Christmas was off the charts. Most fish were under the legal size of 65cm but what they lacked in size they made up for with numbers. We scaled the tackle down to 10lb outfits to help throw the small 2 and 3 inch lures they wanted to eat and to highlight the never say die fighting tactics these fish attribute. Several legal Kingfish were captured during these fast paced, high energy sessions with the best fish going to regular client Greg with his impressive 81cm fish right in front of the Opera house and Harbour bridge, a truely iconic experience!! 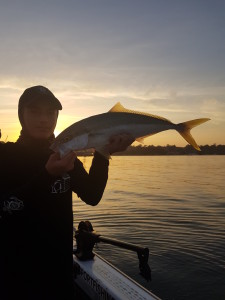 Rat kings were smashing poppers when cast around the abundant structure throughout the harbour. 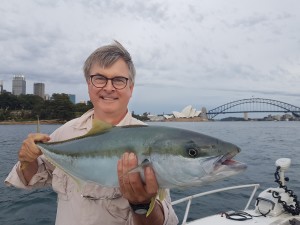 Greg with his 81cm Kingfish after and epic battle on 10lb tackle.

Mixed in with the Kingfish were plenty of other species like Bonito, Tailor and Australian Salmon. At times three different species would be hooked up and this allowed for some unique photos for the excited anglers! 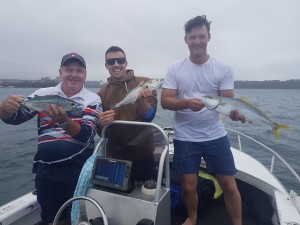 Bonito, Tailor and kingfish on lures and light tackle, three way hook up! 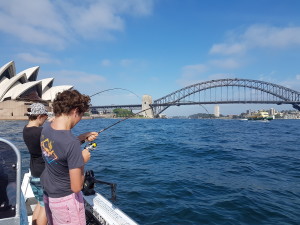 Double hook up in front of the harbour bridge and opera house.

Bonito have continued to bite and are still being encountered throughout Sydney Harbour and Broken Bay just to the north. They make for some thrilling fun with their speedy runs and quick directional changes keeping anglers on their toes. 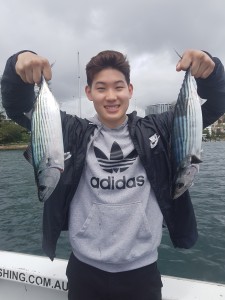 Its been a great season on the Bonito, 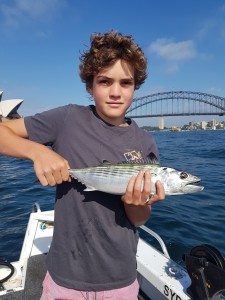 Great fun for the kids!

When the surface feeding pelagics have quietened down we have been targeting the submerged bait balls found using the ever reliable Lowrance HDS 9 sounder/fish finder and sinking our offerings to the bottom. Here we have found some great Flathead fishing with the odd Kingfish, Flounder and Bream thown in for good measure. Some standout Flathead have been caught on the light tackle with the best two coming in at 82cm and 83cm. Both big female breeders were carefully photographed and released. My hat goes off to those guys for releasing our future Flathead producers. 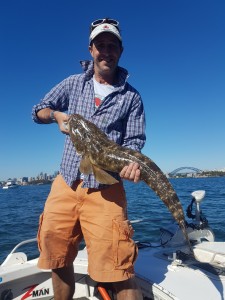 82cm Dusky Flathead within cooee of the coat hanger. 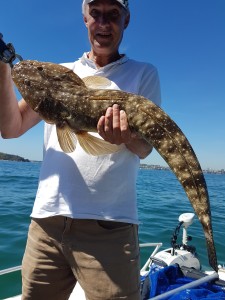 Since my well earned break over Christmas, the fishing has become even better! With a switch over to live baiting for the bigger Kingfish we have had some stellar days with lots of legal Kingfish gracing the decks, the best of which goes to Joe with his chunky harbour fish coming in at 93cm. Some days have seen us run out of live bait due to the voracious feeding habits of the mighty Yellowtail King leaving us feeling elated and exhausted! This great action should continue for a few months yet, so there is plenty of time to book a trip to come and experience what these awesome fish have to offer. 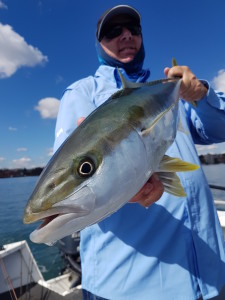 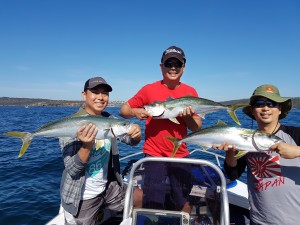 These guys were releasing legal kings after keeping a sustainable feed for themselves. 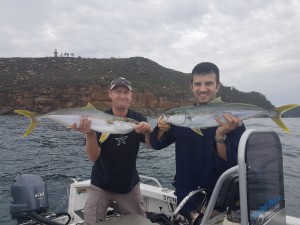 Broken bay has been producing some amazing results too! 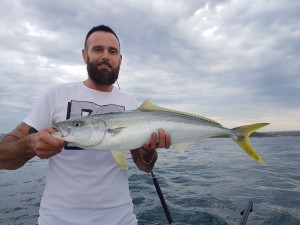 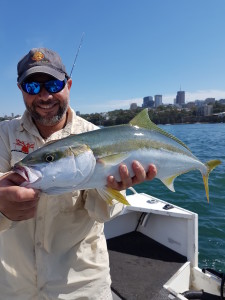 Amongst all of this great Kingfish and pelagic action for local and overseas clients I have been guiding some keen Bream fishers onto their PBs and firsts.  They have been getting some great fish using cicada surface lures and also stick baits from our great friends at Prolure. The pinnacle of breaming is to crack the 40cm mark and several of these fish have been encountered this season on my vessel. This action will also continue for several months yet so if you’re itching to learn the finer points of fooling the wiley Bream give me a call to arrange a suitable day. 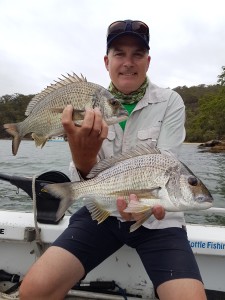 Scott put his great casting skills to the test and scored a great bag of bream on surface cicadas. 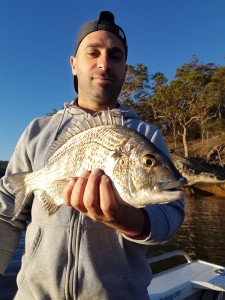 Steven had only mentioned a 40cm Bream would be nice moments before he actually hooked one!! 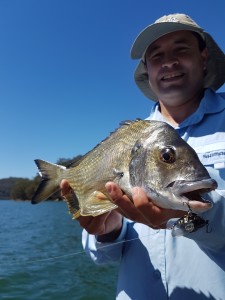 Luis with PB Bream at 42cm taken off the top.

There is one more month to go before I get back into the mighty Mulloway on the Hawkesbury river. We target this iconic fish from March to December each year using lures and live baits. If you are interested in targeting your dream fish, don’t hesistate to get in contact with me to discuss the options available to get you hooked up! 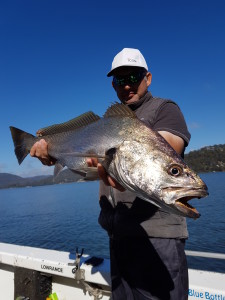 The Mulloway season is about to start, get in early to secure the better tides/dates.

Thanks for taking the time to read this blog, for further enquiries……