The start of Autumn really turned on some great fishing for my clients with plenty of good sized fish and a range of species from Bream, Jewfish/ Mulloway, Bass, Flathead, Tailor, Salmon and  Kingfish. However there were a few notable captures…

Donna and husband Adrian joined me on march 5th for a shot at some early season Mulloway. We started early and were rewarded with a neat 66cm school Jewfish first up. Then followed a bit of a slow patch where we managed no fish! I pulled up stumps and moved to a new location as the tide was getting a away from us.

Within 15 minutes of putting a spread of baits out in our new location we had a great run on the light 15lb outfit. The little 4000 Shimano rarenium was screaming in protest as it lost a large proportion of its spool of line in the blink of an eye! Adrian was on strike and jumped to the challenge and did a great job to maintain tension on this river monster throughout its powerful runs and bone jarring head shakes( which Mulloway are renowned for). Donna helped me clear the remaining rods and I quickly pulled the anchor and gave chase, which by the way, was not just in a nice open peice of water… the fish lead us on a merry excursion between a moored vessel and the bank covered with jetties and pontoons then slotted between another mooring and the one we had just avoided before we were able to lead the fish into open water where we could relax just a little from that hair raising experience. The fight went on for est, 15- 20 min before we got our first glimse of this monster.

We all gasped in shock as the real size of this fish became apparent to us, I opted to put the large environet away as this fish was never going to fit in what now looked like a bait net! I instead, went for my trusty lip grips and got a great bottom jaw grip first attempt and quickly slid my other hand up under the gill plate to secure Adrian’s new PB fish of a lifetime. After a quick discusion of whether we keep or release the fish, I promptly hauled the beast over the gunnels and onto the cockpit floor where we all took stock of the enormity of this fish. High fives, hand shakes and looks of disbelief were all shared between us in that moment on a busy saturday. It now stands as the second largest fish captured on my aptly named vessel ‘Me & Jew’ at a total length of 140cm and est 28-30kg! A day I will never forget and im sure I can say the same for Donna and Adrian. Please enjoy a few shots of that fish of a lifetime….. 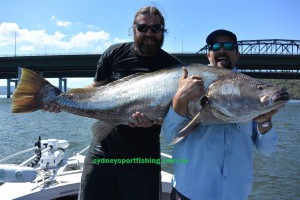 I just had to get in a shot with the angler and fish. 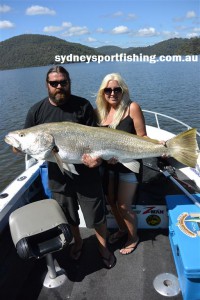 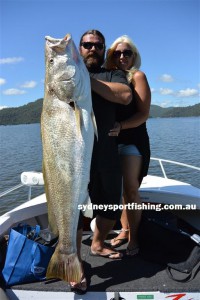 The other notable capture came a week after this awesome experience on the following saturday March 12th, when I was joined by Chris and his two sons Brady (11 y/o) and Declan (15 y/o) who had travelled from Tasmania to fish with me on Sydney Harbour to tangle with their first ever Kingfish. The day before had seen two clients get busted up by some truly large Kingfish whilst casting poppers at structure on resonably light (15lb) tackle. So this particular day I went loaded for bear and with a different strategy up my sleeve to see if we could land one of these Harbour Hoodlums. We spent the first hour of light gathering a tank of live squid from the harbour foreshores and then put our baits to work.

Our first few spots didn’t see any action to my surprise so we headed straight to the site of destruction from the previous day. My aim was to get the young guys onto some managable sized fish to get them used to the drag pressures and the fighting ability of the Kingfish. A spanner was thown into the works when I pitched a large fresh squid head under a marker bouy and handed the rod to Declan with the reel in free spool. Moments later Declan mentioned line was being pulled from the spool so I suggested to close the bail arm and get ready, seconds later he was jolted into action as the fish went for cover and I began motoring off in an attempt to lead the fish from its lair. The technique worked  but the fish seemed to be much larger than anticipated! Around 10 tense minutes later we were laying our eyes on a true inshore monster Kingfish from Australias biggest and busiest harbour! Declan’s first Kngfish encounter and his largest fish to date measured in at an impressive 114cm and was released to live another day. 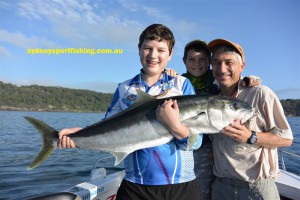 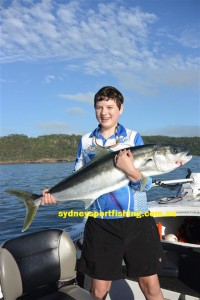 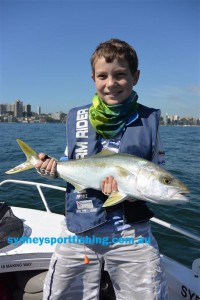 As winter approaches there is still some amazing fishing to be had here in sydney and the Hawkesbury river. There is usually a great kingfish bite that extends up til the month of June and Hawkesbury charters were you can experience the crazy Mulloway, Flathead and big blue nosed Bream on soft plastic lures that have many clients coming back season after season to get their next fix of big fish on light spin tackle so rug up and come join me for some HOT winter action! For bookings and enquiries give me a call on 0405 196 253 or E: dan@sydneysportfishing.com.au